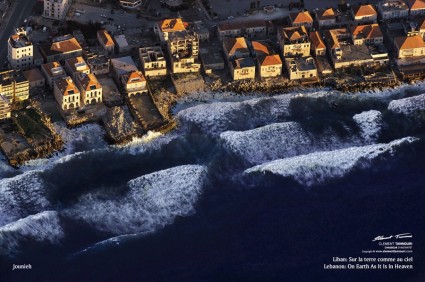 This stunning picture is one of many photographer Clement Tannouri took of Lebanon in his album entitled “Liban: Sur la terre comme au ciel”. There are other images including regions such as Ehden, Qaraoun, Mount Lebanon, Sannine, Bkaakafra, Annoubine, Beirut and Byblos that i will upload later on.

Why i uploaded this picture in specific is that my old house appears on it, the small one on the extreme left with the green windows. I was practically living on the beach back then, too bad they buried the sea in front of it. [High resolution]