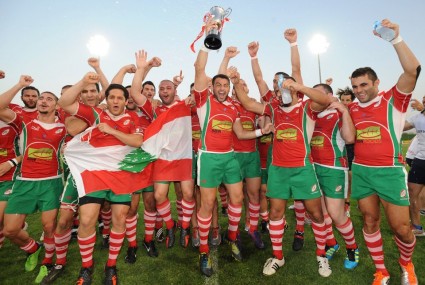 Lebanon ran away with the HSBC Asian 5 Nations Division IV title last night at The 7evens in Dubai, beating top seeds Pakistan 45-12. It was the third successive Division IV finals appearance for Lebanon and their convincing win sees them advance to next year’s Division III competition. In the final, winger Joseph Zidan grabbed a hat-trick of tries and flyhalf Karim Jammal added 15 points through three penalty goals and three conversions as the Cedars’ 15-man approach proved too much for Pakistan. [Source]

The Lebanese Rugby Union team finally won the Division IV title after 2 previous attempts in the past two years and convincingly advanced to Division III. I had the chance to meet one of the players and you should know that these guys are really working hard to produce strong results and advance from one division to another.

Congrats to the whole team and wishing you the best of luck next year!

Here’s a nice report on the final game: