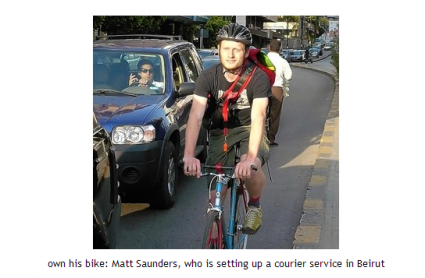 I thought this was some sort of joke at first but then I searched for Deghre Messengers and found an [official Facebook Page] and a [YouTube video].

Deghre Messengers is a fast, clean and Eco-friendly delivery service for a greener Beirut. I think that’s a great idea and I wish Matt all the luck in his project!

This idea reminded me of the movie “Premium Rush“. Hopefully few years from now, we’ll have a Beirut version of that movie inspired by Matt’s initiative.

Cycling has become more than a hobby for a Cheltenham man living in Lebanon. Matt Saunders, 25, who grew up in Cold Aston, near Bourton-on-the-Water, has put plans in place to start his own courier business in Beirut, the capital city in Lebanon.

“There really are too many cars on the streets here, and this results in noise, smog and hour-long traffic jams.
“I thought I saw a big gap in the market for fast, environmentally friendly delivery, and drawing on my experience as a courier, decided to move to Beirut, mobilise my contacts, and try it out.”

Since he started his venture last month, he has taken on three cyclists.
His business will be called Deghri Messengers.
Deghri is the Lebanese colloquial Arabic for straight on and right away.
The couriers are in training and are getting ready to work full time when it launches in September.” [Source]