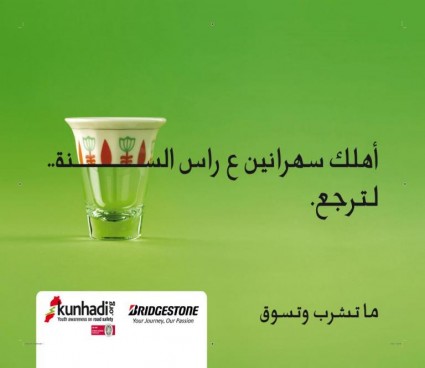 Even though I am all for promoting awareness on the dangers of drunk-driving, I don’t think it’s enough and I strongly believe the Lebanese authorities and more specifically the ministry of interior with the help of few NGOs should take things to the next level.

Why is that? Because the person who’s been drinking will not realize he cannot drive back home. On the contrary, and out of personal experience, you feel very self-confident under the effect of alcohol and start racing on the highway thinking you’re Schumacher.

What should be done? The answer is plain and simple.

1- Instead of deploying ISF and army men on highways and key spots, deploy them near night clubs and restaurants or at the entrance of Gemmayze Street for example and run alcohol tests randomly.

2- Ban all cars from driving back from Faraya or the Cedars or any popular NYE destination on New Year’s Eve except for emergencies. Coordinate with the local authorities and municipalities to let the ban run smoothly.

3- Deploy one or two NGO members (or touristic police) at nightclubs and restaurants to ensure drunk customers are not allowed to drive back home. Force owners to provide alternative taxi services at decent rates.

4- Deploy random checkpoints every 30 minutes on the highways to intentionally cause minor traffic and force drivers to slow down. This could prove frustrating but it’s better than hearing about deadly car accidents.

5- Penalize heavily drunk drivers causing accidents. Jail them for two days if needed. This should send out a clear message to other drivers.

6- Deploy few checkpoints on roads leading to Bhamdoun-Aley, Bekfaya, Faraya, and other mountain roads. Many accidents occur while people are in a hurry to get to Faraya or Zahle or the Cedars or Bekfaya etc ..

7- Penalize restaurant, pub and nightclub owners serving bad alcohol. This should be done all year long and not just for one night. Bad alcohol will knock you out after a drink or two.

Those measures may seem harsh, but given the conditions of the roads and the incompetence of the ministry of public works and most municipalities, there’s no other alternative to stopping accidents in Lebanon especially on New Year’s eve.