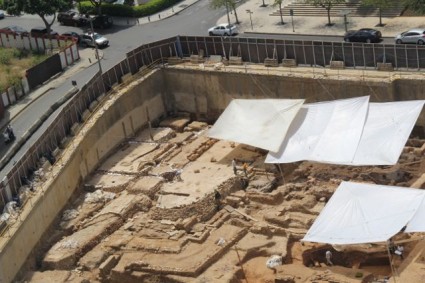 I hope they don’t end up destroying it just to replace it with a hotel. I am not counting on Gaby Layoun for that though.

In addition to the possible Roman gate and road revealed in a previous post, the Landmark site dig (which could be replaced by a 5 star Jean Nouvel hotel) seems to be full of treasures.

Among them are what some archeologists believe could be the remnants of a 4th-5th century Byzantine Basilica.

In these wide shots we can see a number of large white-ish mosaic floors, thought to have belonged to the Basilica:

Great coverage on that story by Habib from the Beirut Report. Read more [Here].