I’ve been to MAD twice in the past 2 weeks and I must say it’s one of the best indoor clubs I’ve been to lately. It’s spacious and very nice from the inside, has good music and its location is adequate for all.

In fact, I used to worry about its location (Nahr el Mot seaside) as there’s no parking space and I hate giving my car to the Valet, but I was informed by a friend that I can park my car on the side of the road and pay the Valet 5000LL (There’s some agreement between MAD valet parking company and the police). Added to that, they opened a new parking lot next to MAD where anyone can park and it fits up to 600-700 cars if not more. Traffic-wise, there’s not much at the moment but things will get worse during the summer.

The club from the inside is divided into two main areas, with the bar in the middle surrounded by small tables and high chairs, and then on the left and right sides small lounges on a more elevated level. Once it gets crowded, you can barely stand though and it could get a bit uncomfortable but that’s how it is in all night clubs in Lebanon with few exceptions such as Buddha bar where you really have your own space. 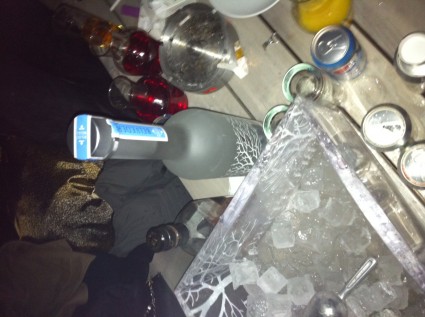 I had a funny incident the first time I went there. It was around midnight and the place was already full. My friends’ table was on the left side overlooking the middle area, so I headed there and put my stuff on the small couch. As I was talking to some friends around the table facing the couch, I thought of pouring myself a drink, but then I saw a guy giving me the weird looks. Turns out I was pouring from someone else’s table even though all my friends were around it! I apologized to the other table but that’s just to tell you how crowded it could get. We were around 20-25 on a table that could barely fit 5 seated people.

The music is a mixture of house music, followed by commercial pop & RnB songs remixed, with old remixed songs in between. Things pick up around 12:30/1am up until 4/5am. Added to that, and similarly to White, sexy female dancers entertain the crowd for around half an hour by dancing on the bar. [See Video above]

Money-wise, you will end up paying between 75-100$ per person if you have a table and around 50$ or maybe less if you find a spot on the bar without reservation.

Mad club is located on Nahr El Mot-Seaside Road, right before Pier7 if you are heading towards Jounieh. You can reserve by calling this number: 03 060090.