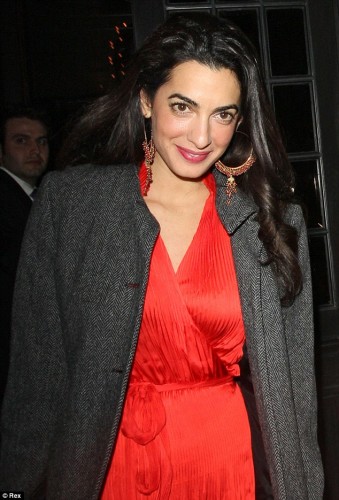 Amal Alamuddin is a “barrister specializing in international law, human rights, extradition and criminal law. She has represented clients in cases before the International Criminal Court, the International Court of Justice and the European Court of Human Rights, as well as in domestic courts in the UK and US” [Source]. She is currently representing Julian Assange, head of Wikileaks, in his extradition proceedings with Sweden.

I was told she is originally Lebanese but I couldn’t find any reference to that. Amal was also voted the hottest UK barrister earlier this year.

George Clooney’s newest love interest has officially been revealed. One week after the award-winning actor was spotted dining with a mystery brunette (and roughly three months since his split from former WWE star Stacy Keibler), the woman has been identified as British lawyer Amal Alamuddin.

E! News reported Monday that Alamuddin is the woman with whom Clooney was recently photographed leaving Berners Tavern in London late last week. Paparazzi originally captured the pair leaving the restaurant after enjoying a meal of contemporary English fare at its Edition hotel-based establishment, smiling at one another before leaving together in a cab. So just who is Clooney’s latest girlfriend? [Source]

Amal Alamuddin was born in Beirut, and educated in English law at St. Hugh’s College, Oxford University. She joined NYU School of Law in 2000 for the LL.M. program. During her time at NYU she studied both public international law and U.S. law, and worked for one semester as a student law-clerk at the Chambers of Judge Sonia Sotomayor at the United States Court of Appeals for the Second Circuit. Upon graduation Ms. Alamuddin joined the litigation department of Sullivan & Cromwell, New York, where she practiced U.S. and international law for three years. Ms. Alamuddin worked at the International Court of Justice in 2004-04 and is one of two NYU-sponsored clerks at the Court, acting as a clerk to Judge Vladen S. Vereshchetin (Russian Federation) and Judge Nabil Elaraby (Egypt). [Source] 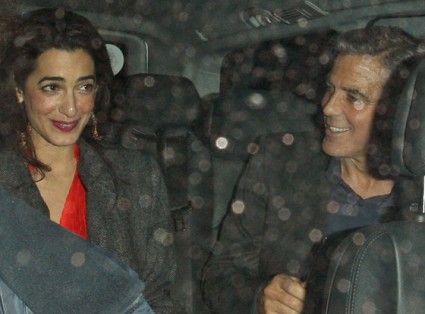