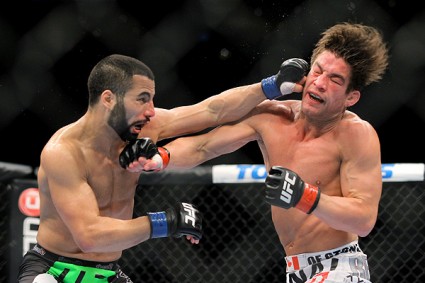 John Makdessi on the left

John was born in Halifax, Nova Scotia, Canada on May 3, 1985 and is a first generation Lebanese-Canadian born to Lebanese parents.[1] His martial arts training started with Taekwondo at the age of 6. When John started high school though, his dojo closed, and he could no longer continue. Towards the end of highschool at the age of 17, he found a Karate Dojo. He spent a lot of his time competing in Kickboxing tournaments, and in 2006 won a gold medal in the USKBA. After going 22-0 in Kickboxing, John started training for Mixed Martial Arts. [Wiki]

We have a few talented MMA fighters in Lebanon. Let’s hope one of them will be able to compete at the highest level of the competition one day just like John Makdessi is doing now.