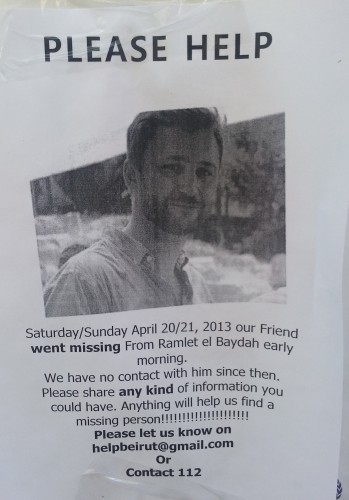 I spotted this poster in Gemmayze the other day and found an online article talking about a Polish diplomat missing in Beirut but I don’t know if they are both related as one has the guy’s photo without his name and the other has his name without a photo. NowLebanon also talked about the missing diplomat and stated that he went missing on April 21st. According to the Lebanese Local police, the Polish diplomat probably drowned with his companion Micheline Maalouf whose body was found last Sunday.

““Local police are convinced that he drowned in a place that is is particularly dangerous for swimmers,” foreign ministry spokesman Marcin Bosacki told Polish Radio.
Wojciech Gawrysiuk, an employee at the Polish embassy in Beirut, is understood to have attended a party in the city on Saturday night in the company of a Lebanese woman named Michlene Maalouf.
According to Lebanese news source Now, Maalouf’s body was found at 6.15 am local time on Sunday morning. She appears to have drowned.”