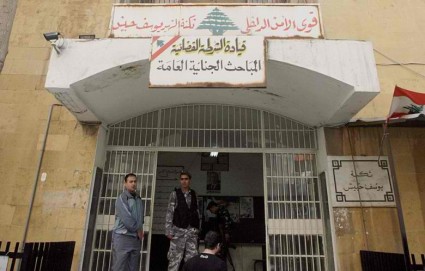 Knowing that every ATM in Lebanon has a security camera attached to it, they could have at least identified the criminal and surrounded him quickly and probably arrested him if they wanted to, but the district attorney could not be bothered as he was finishing Iftar. It’s all about priorities after all.

Three weeks ago, my car window was smashed and my belongings stolen while I was at the beach in Batroun. Horrified as I was, I decided to go to the Batroun police station to file a complaint.

My aim was to have a written report not to have my possessions returned (for I had no faith in having any of the stuff back), but I simply wanted to facilitate the process of having to reapply for a new ID and a driverâ€™s license at the local Serail.

I will spare you the boring details, but suffice to say that my idea of the police was an archaic and inefficient institution could not have been any truer. The first thing the policeman (whom I shall not name) asked me was: â€œYou came all the way from your town [Saida] to our town to swim? Donâ€™t you have beaches in Saida?â€

Naturally, I wanted to tell him weâ€™re still in the same country; that I was free to go wherever I liked; that we should get over the sectarian mentality, but I didnâ€™t. I wanted to get the report and be done with it. The number of useless questions the policeman proceeded to ask were many, most notably whether or not my male friend (who was nice enough to come with me to the police station) was with me at the beach and whether or not heâ€™s Lebanese, which he wasnâ€™t.

After refusing to give me a copy of the report (because apparently procedures state that a report of theft must remain open for 48 hours), we were left in a room for two hours. The policeman later explained that we were waiting for the district attorney to finish his Iftar so as to figure out how to proceed.

During our wait, my sister was able to figure out that my credit card (which was reported stolen at that time) was used in Shakka at 5:30 p.m. at the BLC ATM machine. Thrilled, I ran back into the building to inform the police officer of my findings and to have him add that to the report. He didnâ€™t.

He later acknowledged that there is no way for them to find the thieves, and that â€œanyway, weâ€™re in Batroun and theyâ€™re in Shakka. We have no authority there.â€ So the police in Batroun doesnâ€™t coordinate with the police in Shakka?! I was dumbfounded.

By 9:00 p.m., the policeman took pity on us and said I should come back in three days to pick up a copy of my report and to bring him copies of the car license, since he couldnâ€™t find a place to photocopy my documents. They didnâ€™t even have a photocopy machine, a thing they probably need every day. Argh.

I left frustrated and angry. Very angry. I had never set a foot inside a police station until that day due to my own presumptions. Yet when I turned to the police, I was proven right. The incident was the last straw, and as I marched out of the police station, I heard a little voice in my head say: â€œItâ€™s time to leave. This is no longer home.â€ [NowLebanon]