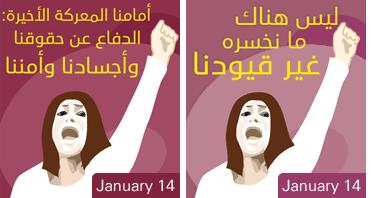 A march against Lebanon’s backwards rape laws is being organized by Nasawiya on January the 14th at 12pm from the Ministry of Interior in Sanayeh to the Parliament in Downtown.

This march comes after the large media campaign Kafa has initiated two weeks ago in an attempt to fight marital rape in Lebanon, which is not considered a crime, where they incited Lebanese not to vote for MPs against passing the law. [Link]

While I am all supportive of these demands, I unfortunately don’t see any change in this matter occurring anytime soon for all the reasons Mustapha pointed out earlier.

I can also add that most MPs and political parties rely on religious figures to get their votes and will not risk losing their support for passing a law against marital rape.

Nevertheless, there’s no harm in showing support for this righteous cause and spreading awareness.