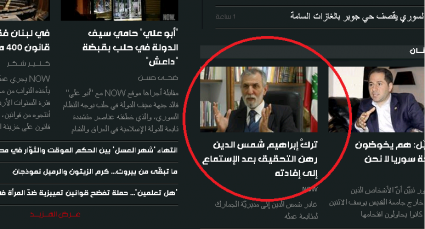 I had kept a screenshot from NowLebanon‘s frontpage last week but forgot why until today. As you can see, they are talking about the Customs General Ibrahim Chamseddine who beat up Al-Jadeed crew, but instead of putting his picture, they put ex-Minister Ibrahim Chamseddine’s picture.

Funnily enough, the ex-minister is the son of former president of the Higher Shia Counsel, Imam Mohammed Mehdi Shamseddine, founding member of the Lebanese Forum for Dialogue and founder of the “Imam Shamsuddin Foundation for Dialogue”, a civil organization which aims at spreading culture of dialogue and peace. So basically he is the complete opposite of the other Chamseddine.