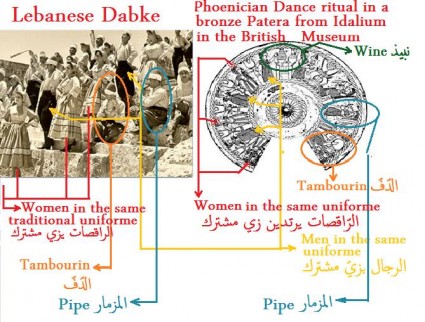 Here’s a nice post by Kadmous.org on the similarities between the traditional Lebanese Dabké and old Phoenician Dance rituals based on Sir Gardener Wilkison’s studies on The Historic Illustrations of Dancing from 3300 B.C. to 1911 A.D.

Of the Phoenicians, we have some illustrations of their dance, which was apparently of a serious nature , judging by the examples which we possess, such as that from Cyprus representing three figures in hooded cowls dancing around a piper. It is a dance around a centre, as is also that from Idalium in Cyprus. The latter is engraved around a bronze bowl and is evidently a planet and sun dance before a goddess, in a temple; the sun being the central object around which they dance, accompanied by the double pipes, the harp, and tabour. The ASSYRIANS ( presently known as syrians of whom Syria Got its name ) , their neighbours , probably danced as much as the other nations, but amongst the many monuments that have been discovered there is little dancing shown, and they were evidently more proud of their campaigns and their hunting than of their dancing. A stern and strong people, although they undoubtedly had this amusement, we know little about it.