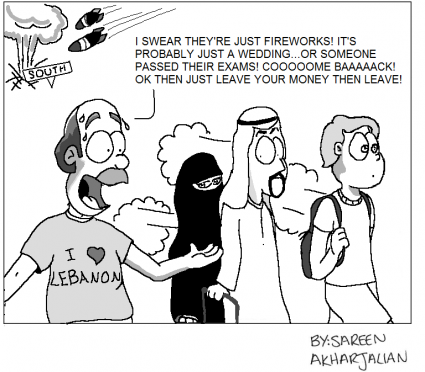 It seems Karl wasn’t the only one who replied back to British Ambassador Tom Fletcher’s Open Letter to Lebanon as Tourism Minister Fadi Abboud posted a letter on his Facebook Page after Karl’s reply.

I have 3 things to say about this letter:

– “Love Lebanon, and No Other” is not meant to be as a monopoly. We should love our country before any other. I am not sure how the Minister made the comparison between exclusive agencies and this slogan but it’s a terrible one.

– I fully agree with the minister that our real enemy is Corruption and I ask him to step out of all political blocks accused of corruption, including his current block.

– I loved the “Freedom of Information Act” idea and I would support it fully but I doubt that the UK Ambassador or any Ambassador in Lebanon can help implementing it. The Minister should work on gaining the Lebanese people’s support on this matter before anyone else.

I read your open letter and I read Karl’s remarks with interest , I am a minister in the Lebanese government , and I happen to be a British citizen due to the fact that I lived and worked in your country for years .

I know where Karl is coming from; I appreciate not only his excellent command of the English language, but also his pride which should be without prejudice. I do agree with some of his remarks but at the same time I agree with most of yours. ,.
In my country we find it difficult to share, we hate sharing, we love exclusive agencies. One of the Christian Maronite political parties came up with a motto “love Lebanon, and no other”. We love monopolies.

I have a lot of respect for your country. Great Britain received me, and many other foreigners with open arms, and we received all of what the country has to offer exactly like every British citizen .Furthermore I do not want to fall in the trap of comparison. I love Lebanon my country, I respect my people, I think like you we probably have one of the most interesting cultures in the world, but this will not stop me respecting and appreciating other cultures.
We in Lebanon, at this stage of our long history feel very vulnerable, and we have little space to maneuver when it comes to relations with other countries. This should be clear for everyone to see, Lebanon is not only about Lebanese living in Lebanon, we have a duty towards the Lebanese Diaspora, many of them with dual citizenship, living in other countries around us and overseas.
Mr. Ambassador, yes your help is needed, but let us concentrate on the one enemy from within, this enemy is holding us back and keeping us from achieving any growth, it is the real enemy, more powerful than any other:” Corruption”.

I have been watching all our friends specifically our friends from the free and democratic countries, trying to help through financing NGOs among other things. I think they can do more.
I would like to suggest, a new approach supported by the United Kingdom towards our members of parliament. We need to have a new law concerning the freedom of information. The law should be simple; anything to do with public money should be published on the internet with free access to all. This will also help any country to achieve more transparency, it is to a certain extent available in your country, but transparency in my country is still a luxury we think we can live without.

I call on you Mr. Ambassador to adopt my unloved orphan “ Freedom of Information Act “ and help us by lobbying with all your friends , and ours, to bring this dream to reality. We need all the support we can get to achieve this goal.
This law if passed and applied will radically reduce corruption and will make Lebanon the dream country it should and could be.