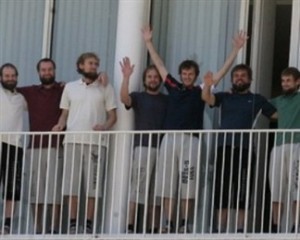 The chief negotiator charged with ensuring the release of the seven Estonians cyclists revealed that they were accidentally abducted by the Popular Front for the Liberation of Palestine â€“ General Command, he told Asharq newspaper in remarks published on Wednesday.

The negotiator, who chose not to disclose his name, said that the abductors were seeking to kidnap Americans, then Frenchmen as a second choice, and English nationals as a third one. [Naharnet]

So we know who kidnapped them and their exact location yet we can’t do anything about it because they did not realize they were Estonians, and not American, English or French?

Maybe the Lebanese government should issue a decree urging kidnappers and evil doers to check their victims’ passports before kidnapping or killing them.