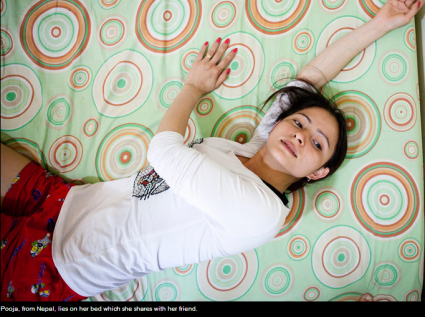 Check out the rest of these photos that got featured on the CNN Website [Here].

Photojournalist Natalie Naccache grew up with Lebanese parents in London and visited the small country on the eastern shore of the Mediterranean Sea every year since she was born. On her visits, Naccache, who is now based in the capital city, Beirut, noticed most families had a maid who assumed many household roles: cook, housekeeper, mother, nurse.

“These maids were basically living their lives for their employers. They were dedicated to their employers, and I found that very uncomfortable,” Naccache says.

She says the maid culture is embedded in the Lebanese way of life, which is why she chose to capture it in her photo essay “No Madam.”

Naccache asserts while many maids are treated well, others aren’t as lucky – subjected to verbal and physical abuse, racism, even rape, by recruitment agencies and employers. According to recent statistics, there are more than 200,000 migrant domestic workers in the country of roughly 4 million. [Full Story]

See Also:Anthony Touma out of The Voice
Posted By Najib
Categories INFORMATION,LEBANON,PHOTOGRAPHY