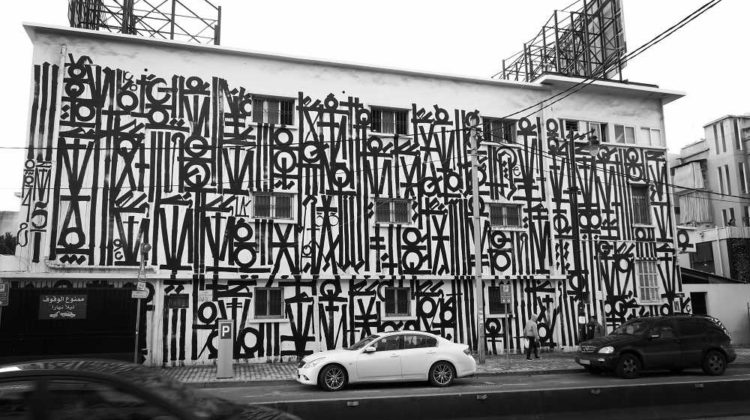 Marquis Lewis, known as Retna, is an American contemporary street artist of African-American, El Salvadorian and Cherokee descent. During the holidays, Loft Investments by Ayad Nasser in partnership with curator19.90 flew in Retna to Beirut as part of Urban Dawn Vol II, the largest contemporary and street art exhibition in the region. Urban Dawn, Vol. II showcased work by 60 artists – 50 international and 10 local – all inspired by environmental issues, urban regeneration and raising awareness of recycling. Retna executed two murals in two different neighborhoods in Beirut. The first was in a public school in Ashrafieh, close to Sassine Square. The second was on a building facade in Ouzai.

Retna is known for his unique alphabet, created with influences from ancient and modern languages such as ancient Incan, Egyptian hieroglyphs, Arabic, Hebrew and Asian alphabets. Retna’s aim is for everyone to feel a certain familiarity when they lay eyes upon his work, even if they can’t immediately decipher it. Each masterpiece has a story and meaning behind it, and it usually emphasizes a dialog Retna has experienced in a specific place, time and context.

In addition to exhibiting at institutions and galleries in Los Angeles, Miami, London, New York and Hong Kong, Retna has done advertising work for brands such as VistaJet, Louis Vuitton, and Nike. Retna has most recently teamed up with Justin Bieber to create the cover of the singer’s “Purpose” album that debuted in 2015. 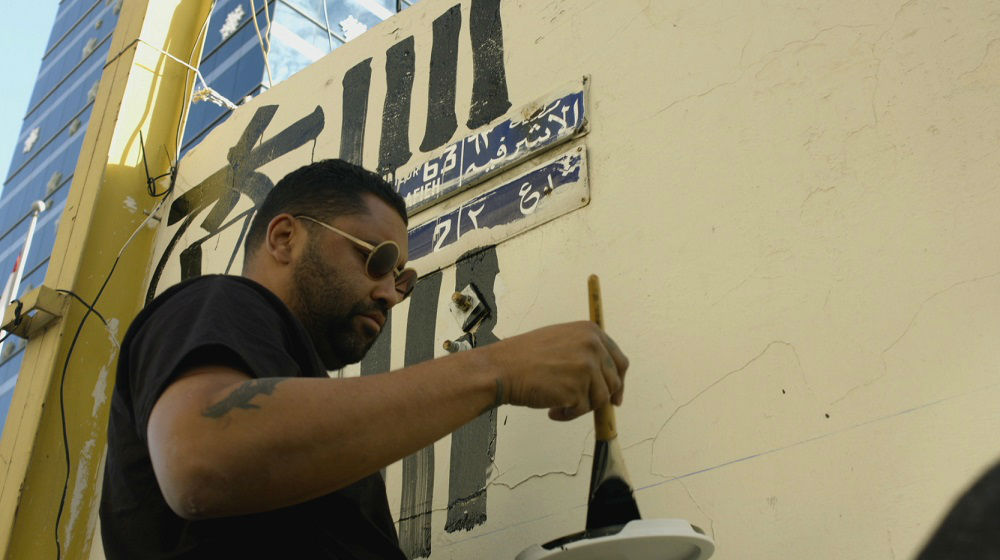 Given his diverse background, Retna is all about breaking stereotypes and initiating dialog and contact between otherwise divided or secluded communities. Street art has always been a way to communicate things that are hard to initiate around the coffee table, like street art in LA where Retna grew up, where gang culture and messaging was always powerfully painted on walls across inner-city neighborhoods. 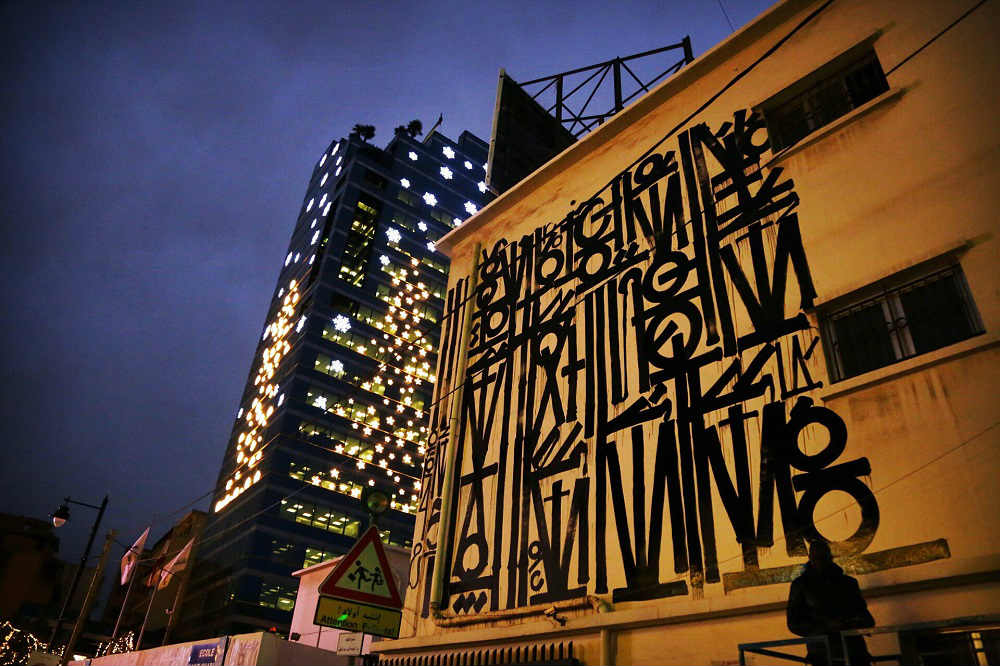 In Ashrafieh, the wall was provided by the Collège Saint Charles in collaboration with Achrafieh 2020 and Retna chose to include two powerful quotes by Gebran Khalil Gebran:

“The true wealth of a nation lies not in its gold or silver but in its learning, wisdom and in the uprightness of its sons”

Young students attending the public school joined Retna in creating the massive mural over a period of two days. Many local residents also stopped by to watch and try to decipher the complex, beautiful script Retna has perfected over the years.

After two days in Ashrafieh, Retna set up shop in Ouzai to decorate a building’s facade there with his name. Four days later, two neighborhoods that have been historically divided in Beirut, and remain somewhat remote despite their proximity, had one thing in common: a powerful street art message by an urban street artist who focuses on bringing communities together and bridging divides that are often caused by misconceptions and a lack of dialog. 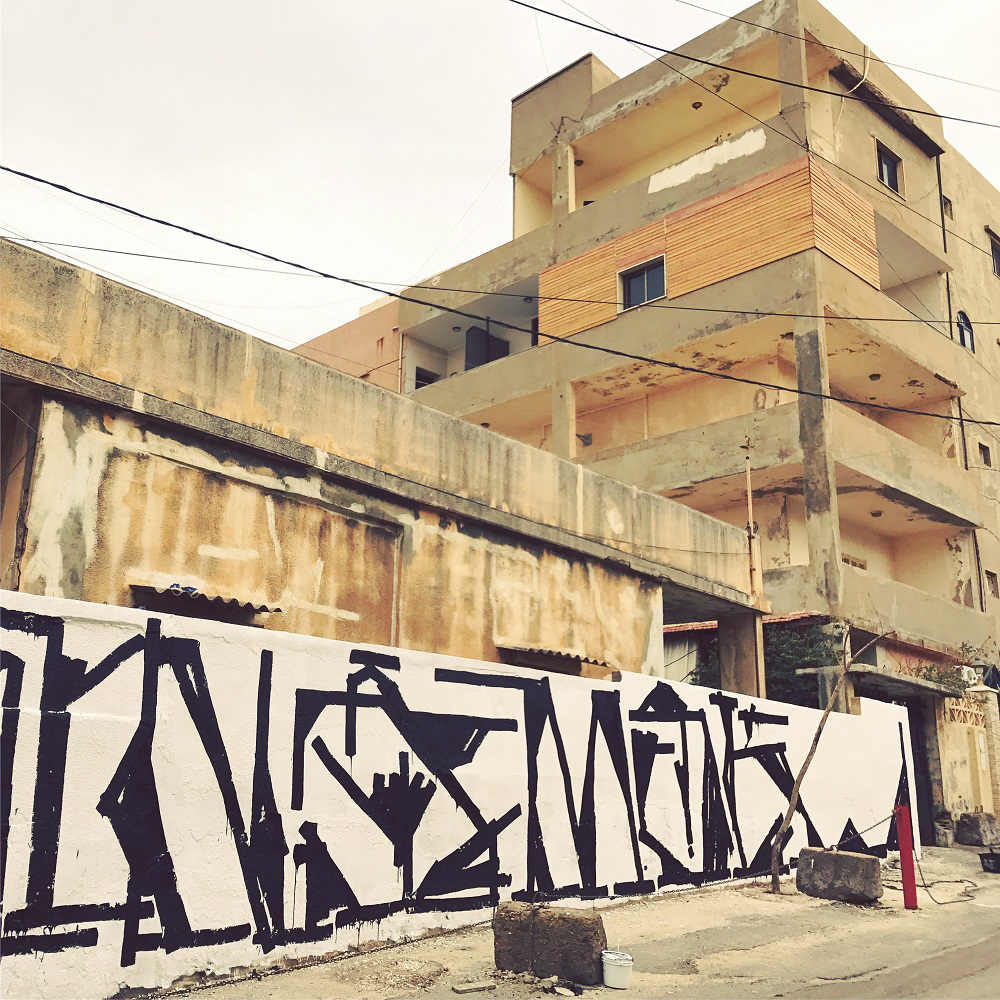 Street art is a powerful and interactive art form that Beirut has been indulging in for many years. It’s rare to find a blank canvas on Beirut’s worn-out and bullet-ridden buildings, even on its new, shiny skyscrapers. Local street artists have made it a sight to behold, but it’s always amazing when an artist from abroad leaves his mark on Beirut’s complex, chaotic and gorgeous urban environment and we have to thank Ayad Nasser for making it happen.