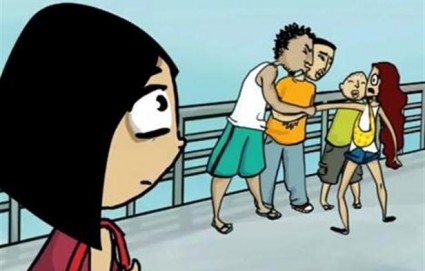 A picture from “The Adventures of Salwa” campaign taken from NowLebanon

The streets of Beirut aren’t as safe as they used to be. Or at least, this is the feeling that many girls and women have nowadays. Sexual predators are everywhere, and according to witnesses who spoke to NOW, it doesn’t matter whether it’s the middle of the night or the middle of the day; whether the streets are empty or full of people.

Lea Khayata is a 25-year-old Lebanese woman who lives abroad and comes back for the holidays. Last summer, she was in Beirut for an internship and wanted to catch a service early in the morning. She was in a hurry and didn’t think twice when the driver flung open the door next to him for her to get into the front passenger’s seat. “I know you’re never supposed to sit next to the driver, but he was so old, and I was in such a hurry, I thought it would be ok.” First, he heavily brushed his arm against her breasts by pretending to reach for the door because it wasn’t closed properly. “It was until he put his hand on my thigh and started stroking it that I realized what he was doing,” she said. Khayata opened the door and got out of the service right away. [Full Story]

I’ve been hearing a lot of stories lately and the streets are no longer safe neither for men nor for women to be honest. Abaad, a Resource Center for Gender Equality, gave NowLebanon few tips for women to stay safe:

2. Scream. Most sexual predators are looking for an easy target, and if you make a scene they will probably leave you alone.

3. Distract them. If you’re stuck in an elevator with someone and you have a bad feeling about him, make small talk. Discuss the weather or ask for the time. By instigating a conversation you’ll catch him off guard, and he’s more likely to not do anything.

4. Fight back. If someone grabs you, pinch the attacker under the arm between the elbow and the armpit, or in the upper inner thigh. After the initial pinch, go for the groin. Hit him with your knee, then run.

5. Run. Get out of there. Make a lot of noise. If he feels like someone else might notice, he will most probably run the other way himself.