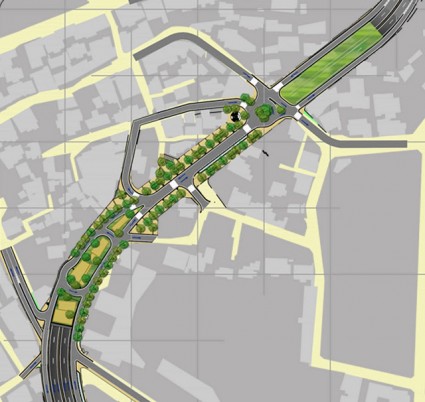 I have to admit I am always impressed by the studies and reports done by Executive. The Fouad Boutros Highway has caused a lot of controversy in the past few months yet no one bothered clarifying this matter to the public, and examining its pros and cons on Mar Mikhail and the overall traffic in Achrafieh.

Having said that, I strongly recommend you read the whole report [Here].

Executive took both sides to task, analyzing the likely impact the Boutros road would have if constructed. At the outset, it became clear that there were no real facts to deliberate on, because detailed project plans and impact studies were either hopelessly outdated, kept confidential, incomplete or non-existent.

Without such data, it is not possible to give a reasonable assessment of social impact or cost estimates, as well as the effect on traffic flow, business and air quality. It is worrying is this project was nevertheless put on the people’s doorstep.

At the forefront of opposition to the Boutros project are two conservationist civil society organizations, the Association for the Protection of Lebanese Heritage (APLH) and Save Beirut Heritage (SBH), and a newly formed group named after the two neighborhoods that will be most directly affected, the Civil Coalition Against the Hikmeh-Turk Link. They have succeeded in creating outrage and protest against what they describe as a highway project that will only make life worse for residents of east Beirut. Vigorously mobilizing media, the detractors have drawn enough attention to their case that MP Nadim Gemayel, one of the deputies representing Ashrafieh, tells Executive, “[Members of Parliament] will not accept [any action] if there is a huge opposition about this and if the residents [of Ashrafieh] are not beneficiaries of it.”

Civil society interests are to divert the use of the project’s state-owned land into something totally novel: a public park for Ashrafieh. According to Najat Saliba, chemistry professor at the American University of Beirut, particulate pollution levels along a congested Beirut thoroughfare range between two and 4.5 times the limits recommended by the World Health Organization. The park alternative would bring Ashrafieh rare things such as playgrounds, benches, grass, shrubbery and trees.

However, cancelling the Fouad Boutros link could just as well have the totally unintended effect of filling the neighborhood with more high rises, warns CDR’s Helou. If the land is not used in accordance with the original expropriation purpose, old owners will have the right to buy back their land at 75 percent of current market prices and offer them to developers at full prices, he says. “In no time, you will have buildings going up there.”