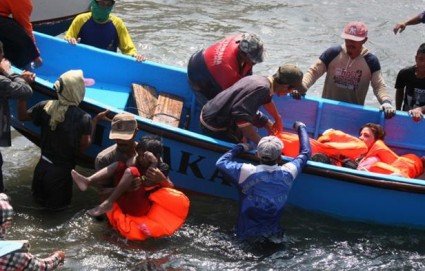 I don’t recall the last time I heard about Lebanese getting smuggled into another country. According to this article, many families from Akkar and Beb el Tebbane are paying thousands of dollars and are risking their lives by going on a tiny fishing boat all the way to Australia.

One of the Lebanese interviewed said he was either forced to carry arms or seek asylum.

Scores of Lebanese from the north of the country have been traveling to Indonesia, boarding fishing boats that carry asylum-seekers into Australian waters. But under the new law signed on July 19, unauthorized arrivals will be sent instead to Papua New Guinea for assessment and if found to be refugees, will be settled there, and if not, they will be sent back home.

On July 25, about 40 Lebanese arrived at the Christmas Island located about 500 kilometers south of Jakarta, Indonesia. The island is a common destination for asylum-seekers, who crowd into boats at Indonesian ports and pay smugglers to ferry them to Australian shores. These young men, however, were unaware that they would never be settled in Australia. [Source]