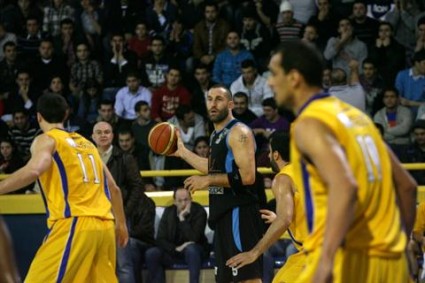 We’ve currently reached the semi-finals of the Lebanese Basketball League with Riyadi(Beirut) playing Anibal(Zahle) and Sagesse playing Champville. Riyadi are currently tied 2-2 with Annibal with the last game scheduled for tonight.

Riyadi has been winning the title for the past 7 years and no one can argue that they didn’t deserve to win, but the behavior of their administration and supporters (and few players) is unacceptable and getting worse by the year. Everytime Riyadi is having a game in Manara, the fans start shouting sectarian and disrespectful slogans and sometimes end up attacking the opposing team’s players, fans and staff. To be fair, other teams’ fans, such as Sagesse, Anibal and Champville, also shout disrespectful slogans from time to time but not as frequently as Riyadi fans.

Added to that, The Sporting Club’s administration never makes any effort in controlling its crowds and allocating enough space for the other team’s fans. Only 10 Annibal fans were allowed in Game3 few days back and Champville had already threatened few months back not to go through with the game if Riyadi fans are not taken out from behind their bench.

The Lebanese Federation met yesterday and decided to play the final game between Annibal and Riyadi with no fans, and banned Riyadi player Ismail Ahmad for one game after he cursed two members of the federation. I wouldn’t be surprised if Riyadi does not comply with those decisions. I guess we will have to wait and see.