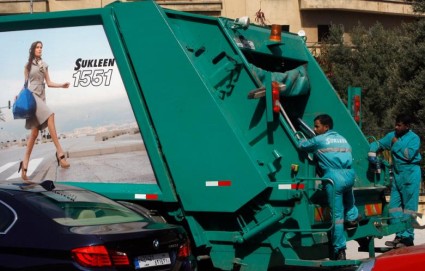 I noticed piled up Sukleen garbage bins in a couple of spots in Jounieh today but thought the Sukleen truck didn’t pass by yet. I am not sure what this sit-in is really about but this matter should be given a top priority.

Beirut and Mount Lebanon will become buried in waste after Sukleen announced on Saturday that it will suspend collecting garbage in both governorates. “People’s sit-in near the Nahmeh plummet and blocking the road in front of the company’s trucks for the second day in a row lead to the piling up of garbage that were ready to be plumbed,” a statement released by Sukleen explained.

“Road blocking suspends the collecting of waste and their procession in Beirut and Mount Lebanon,” it added. [Link]