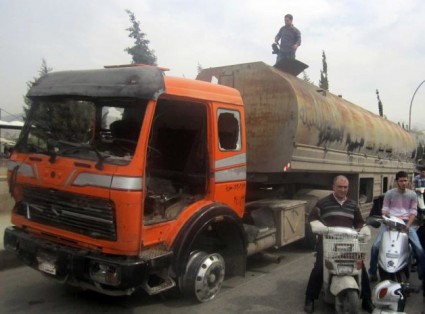 We’ve been having this problem for years and the solution is pretty simple even though it might prove a bit more costly. Use the sea as a mode of transportation and keep the Lebanese exporters away from the Syrian crisis and the problems between the two countries.

Syria has prevented the export of Lebanese agricultural products via its territories in retaliation for the burning of several Syrian fuel tankers over the past weeks, farmers and owners of packaging plants in south Lebanon said.

“The decision by the Syrian side to forbid Lebanese trucks to pass through Syria … amounts to an immense crisis affecting the owners of banana and citrus packaging plants and farmers across Lebanon,” said a statement read during a demonstration in Qassmieh, 10 km north of Tyre.

Lebanese agricultural products according to analysts are in big demand in the Middle East Gulf region due to their quality, unique flavor and excellent taste, but Syria has always been the obstacle in trying to bring these products to the markets on timely basis. [Link]