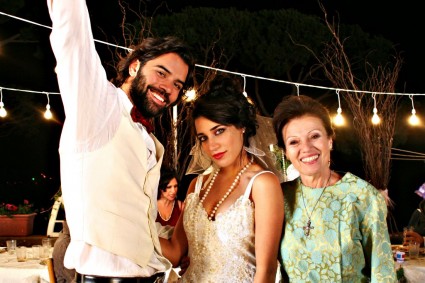 Before I begin my review, you should know that Tannoura Maxi has been banned officially from theaters following a request by the Lebanese Catholic Information Center. I am of course against this ban because 1) it’s cultural terrorism and 2) the movie didn’t disrespect the Church nor Christianity in anyway.

Moving on to the review, let me just say in few words that Tannoura Maxi is like a badly prepared Tabbouleh. It has all the basic ingredients for a fine Lebanese Tabbouleh but some ingredients are put in excess, while others are missing and inappropriate ingredients are added. I personally found the movie long and boring, the plot a bit silly and unrealistic (despite being inspired from a true story), the characters dull, and the whole sex and religion themes very badly expressed.

Despite all that, I can understand why some people might like it from an artistic and poetic point of view. Indeed, the movie is very nicely filmed and has special features unseen before in a Lebanese production. The visuals and art direction are beautiful, especially the close-ups on pretty things and nostalgic items. I particularly loved the part where they play the old Ray-o-Vac ad. Nevertheless, all those positive aspects are not really appealing to the average or non-artistic viewer which pretty much explains the overwhelming negative feedbacks Tannoura Maxi received so far.

Digging deeper into the movie, and given that it’s inspired from a true story on how the director’s parents met, here are few things that I thought were inaccurate or did not like:

1- No one wears high heels to go to the well or â€œ3al 3einâ€ as they say in Lebanese villages.
2- Women were way too overdressed for masses in the movie. Thatâ€™s not accurate specially that most of them live in the village and are not coming for a visit and we are at war.
3- The music played in parties and on weddings is weird and has almost nothing to do with old traditional Lebanese songs. Unless I am missing something, this music is new to me.
4- Iâ€™ve been to masses in many villages and never heard women talk loudly and in such an offensive way about others. It was way too exaggerated and offending to Lebanese women and Lebanese in general.
5- Public signs of affection were not common in villages, even during war time. They are not even that common in the cities in Lebanon. Oh and Priests didnâ€™t dirty dance and kiss at the time.
6- The scene where the priest is cutting some wood and showing off his muscles is really bad.
7- Thereâ€™s at least 10 minutes of footage where the main character is walking towards the church, her house or to the well and you only hear the clacking noise of high heels. Thatâ€™s where I felt like walking out of the theater.
8- I didnâ€™t really understand the role the mentally challenged characters played in that movie. They are given way too much importance but itâ€™s like the director focused more on how good they were playing their part rather than make it a significant one.
9- Thereâ€™s a whorehouse in the village. Show me one village in Lebanon that has a whorehouse or had one back in 1982.
10- I did not sense a real connection between the various scenes of the movie. Itâ€™s like you jump from one scene to the other.
11- The monologues are confusing and seem out of place. Thereâ€™s way too many as well.

In regards to the movie themes and controversial scenes:
1- Director Joe Bou Eid is portraying the Lebanese Forces as being thugs and criminals while Leftists are the good guys. I donâ€™t care whoâ€™s wrong or right historically but taking sides does not send out the right message to younger generations.
2- The scene where the LF guy is the only one dancing with an Arak glass in one hand and a cigarette in the other is pure clichÃ© and unoriginal. Leave those clichÃ©s to Comedy shows ya Joe!
3- The two key characters in the movie barely talk to each other and all of a sudden have sex and get married. When I first heard him talking about the movie on TV, and saying that it depicts how his parents met, I thought I was in for an original story. However, the movie makes it look as a one night stand where the girl got pregnant and had to marry the guy.
4- The sex scene did not occur in the Church but in a convent. Itâ€™s still a holy place but I still donâ€™t think thatâ€™s a valid reason to ban the movie.
5- The movie shows the priest as a weak and vulnerable person, one not worthy of becoming a man of God, and does not really insult the Church or Christianity. Thereâ€™s nothing wrong with falling in love with a girl and stirring away from priesthood, but going against your own beliefs by sleeping with the girl and then marrying her the next day is not something I would go out and tell, or at least not tell in the way Joe Bou Eid did.

Thereâ€™s one review on IMDb by Sarah Zebian which I agree with and pretty much says it:

The movie is full of eye-candy. Very little else, except quick-wins like the Rayovac commercial, the traditional dough-making scene, etc, obviously added in to trigger nostalgia without having any real role. Close-ups of the main characters and colorful scenic shots, despite their beauty, are excessive and quickly turn into a nuisance – a failed attempt to overshadow the lack of substance in the movie.

The love story fails to come across as genuine – as the rest of this movie. The two main characters never utter a word as far as I noticed! Generally, presumptuous and a waste of time!

On a last note, I understand that we should be supportive when it comes to Lebanese movies but I think we should point out a bad movie when we see one. Moreover, I strongly believe Lebanese directors need to come out with original ideas and stop digging old civil war stories.