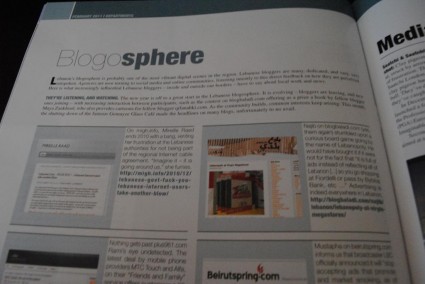 I enjoy reading Communicate Magazine and we’ve been featured in that magazine quite a few times, but their top ten Lebanese blogs list in the December 2011 issue is very disappointing to say the least. Don’t get me wrong as there are some great blogs featured which I enjoy reading and follow daily but if the list is based on how consistent the blog is in terms of posts, some of the top ranked blogs in the list barely post once per month. If it is based on the blog’s popularity, some are so lousy they aren’t even ranked in Lebanon.

Put aside BlogBaladi as I am not writing this post because we weren’t included, but how can you make a list of Lebanese blogs and not mention the BeirutSpring or Trella.org for example?? Those blogs, along with few others, have been here forever, are daily updated, very interesting to read and are popular not just in Lebanon, but in the whole area.

I know it’s just a list, but given that the magazine has a whole section dedicated to the Lebanese Blogosphere, they should know better.

Update: Apparently the list is based on blogs related to marketing & communication only and the blogs aren’t in order. They should have mentioned that as it makes more sense now.