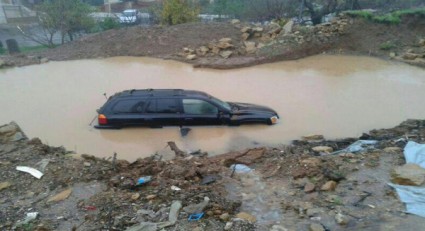 The storm hit Lebanon hard in its first day leaving 4 people dead and tens injured according to the Red Cross [Source]. The victims I know about are 3: A young baby in Iqlim al-Kharroub who died after rainwater flooded Bedouin camps, a man identified as Joseph Antoine Sfeir who got killed in a car crash on the Zhaimeh-Mansourieh road, and a van driver who died when his vehicle collided with a car on the Dahr al-Baidar road. [Naharnet]

After seeing the disastrous outcome of the storm today, the minister of education decided to close down schools and nurseries all over Lebanon for the next two days, but I honestly think everyone should stay home until this storm calms down because the authorities/municipalities/ministries are not capable of keeping us safe.