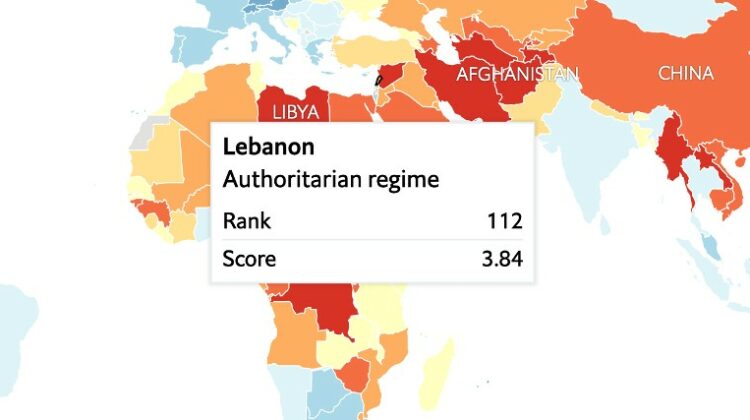 More than a third of the world’s population is living under authoritarian rule according to the 2021 Economist’ Global Democracy Index, and only 21 countries were labeled as full democracies. Pandemic restrictions have damaged democratic freedoms in 2021 and the global democracy index score from 5.37 to a new low of 5.28 out of ten.

Lebanon is one of many countries who moved from “Hybrid Regime” to “Authoritarian Regime”, which is the worst ranking out of four possible ones.

– Full Democracy: a nation where civil liberties and basic political freedoms are not only respected, but also reinforced by a political culture conducive to the thriving of democratic principles.
– Flawed Democracy: a nation where elections are fair and free and basic civil liberties are honored but may have issues (e.g. media freedom infringement).
– Hybrid Regime: a nation where consequential irregularities exist in elections regularly preventing it from being fair and free.
– Authoritarian Regime: is a nation where political pluralism has vanished or is extremely limited. These nations are often absolute dictatorships, may have some conventional institutions of democracy- but with meager significance.

If you were hoping for substantial change in the upcoming elections, keep in mind that we will never have fair elections under a hybrid or even worse authoritarian regime.

#Lebanon passed from "Hybrid Regime" to "Authoritarian Regime" between 2020 and 2021 according to @TheEconomist's Democracy Index https://t.co/qcvkfiNWRA pic.twitter.com/qkzOLuhtMV