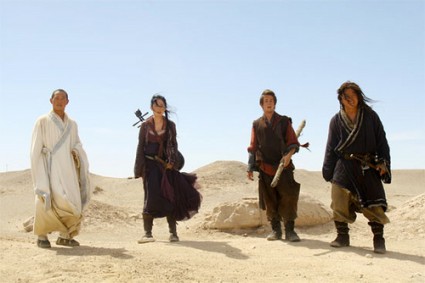 I was watching the Forbidden Kingdom on MBC 2 when they got to the part where Jackie Chan is the middle of the desert and does a small prayer so that it rains. As soon as he starts his ritual, the scene is cut off and the next thing we see is Jackie Chan getting to the end of the desert.

I looked on the internet to see what the scene included and it turns out it is classified under the category “Blood/Gore” because as Lu Yan (Jackie Chan) was trying to create rain, he thought he had succeeded when he saw few drops fall on his him only to realize it was Lan Cae He (Jet Li) urinating on him.

Here’s the video if you guys never noticed the scene was gone.

I really don’t think this needed to be censored. GORE?? Seriously??