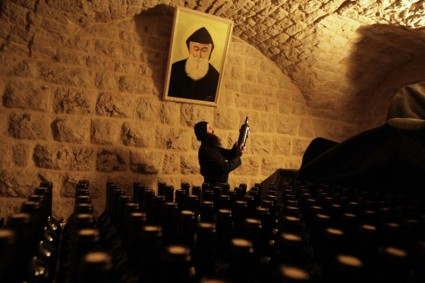 I was reading few days back on beirutspring an article written by an Egyptian Journalist called Ahmed Ramadan on winemaking in Lebanon and why Lebanese drink more alcohol than other Arabs.

In the first paragraph of the article, the author assumes that Lebanon is a Muslim country and that unlike other Muslim societies, it allows advertising drinking, serving and buying alcohol. Someone should remind this guy Lebanon is NOT a Muslim state and abides by a constitution written by both Christians and Muslims where each citizen can freely practice his beliefs.

In an region where Islam prevails, winemaking can be a failing trade. It’s well-known that Muslims are prohibited from drinking, serving, selling and buying alcohol. Some Arab societies frown upon alcohol consumption and look down on those who enjoy a glass of wine or a bottle of beer.

He continues his primary false statement with another absurd one, that claims that Lebanese drink “due to the civil wars and financial woes that have broken the heart of the capital” and as “an escape in the form of fun times.” Well Mr.Ramadan, i assure you that most of us drink because we enjoy alcohol and don’t consider it as an evil thing. We have a great local beer and great local wines and we drink them the same way most Egyptians like their Shishas.

Last but not least, if there’s anyone that drinks in Lebanon out of frustration and to escape the restrictions set by their local governments, they’re many Arab tourists coming from all over the Arab countries, including Egypt.

PS: If i were Ksara, i would have asked this author to correct those false allegations about Lebanon and the Lebanese as this article is bad publicity for them.