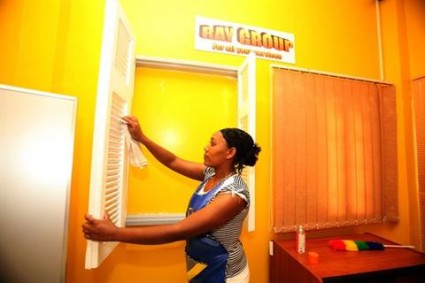 Mark emailed me this piece of article [DailyStar] a week ago and I honestly don’t know what to think of it. There are positive and negative aspects to this training but I don’t think it will make things better overall.

1- From one side, training is good specially when the maid in question didn’t even have a house to live in. One of my friends’ maid did not know how to use the toilet when she came and used to wash her face with it. Those may seem like basic issues, but let us not forget where those workers are coming from and most importantly that we are not doing much better in terms of poverty and poor areas in Lebanon.

2- From another side, training maids will not stop racist Lebanese from beating them or treating them badly. If anything, those Lebanese should be the ones trained and slapped in the face to realize they are dealing with human beings.

3- There’s something very worrying about those training centers, is that agencies providing them would start demanding higher salaries for the trained domestic workers, and consequently start a bidding on those human beings as if they’re goods to sell.

4- Last but not least, there are no guarantees that these trainings are of any use, and for that purpose, the government or even better (Since we cannot rely on the gov doing anything) the embassies concerned should demand such a training for all their workers in Lebanon. There are many offices who pretend to train maids before providing them with employment but they could be beating them just as well.

In all, the training center could prove useful and harmful at the same time and is still not tackling the main problem which is our society and the mentalities we still have. I leave you with few made-up testimonies by Angie from NowLebanon blogs on that training center [NowLebanon].

â€œIâ€™ll admit it, I did give Maria an insane beating Tuesday night after she failed to answer the front door for a guest because she was too busy using the plastic pail we placed especially for her on the balcony to urinate in.â€

â€œWhat she does with the contents of the pail once itâ€™s filled remains a mystery to me. But my point is, I canâ€™t *not* beat her for something like that, right?â€

Another academy participant, Zeinab Khattar, says sheâ€™s learned that physical abuse is actually counter-productive. â€œAfter a while, the pain from beating my maid was slowing her down. Now I just threaten to kill her in her sleep instead.â€

â€œI hope one day I can make my home a safe place for maids, but until then, I just look at the four dead bodies Iâ€™ve racked up over the last few years as another reason to feel superior to my neighbor, Nadine, whoâ€™s had the same woman working for her for 8 months now. Ptfff. Commoner.â€