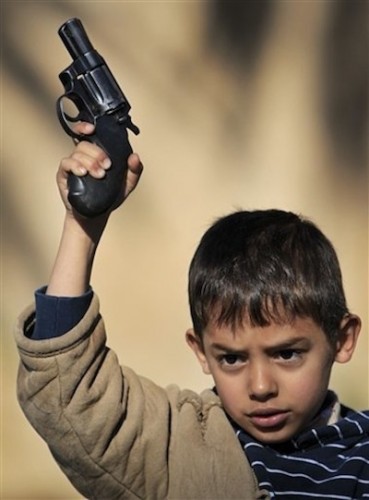 I follow VICE religiously. They have some of the most intense documentaries like the one on The Cannibal Warlords of Liberia. I hope one day they’ll make a video report on Tripoli or Ain el Helwe or maybe on the armed groups and gangs in the Beqaa.

Read the rest of the article [Here].

Child soldiers have long been a problem in Lebanon. During the civil war that ravaged the country for nearly 15 years, many kids were practically born with machine guns in their hands. Since the war died down, most Lebanese thought those days were over, but the conflict in Syria has caused the security situation in the country to deteriorate, especially in northern cities like Tripoli, and has prompted a new generation of kids to pick up guns. Poor and mostly Sunni, many of them are drawn to the growing Salafist militias that have spread throughout Lebanon over the past few years.

Jamal grabs a cell phone off the desk and opens it to play two videos. The first one is of him holding a PKS machine gun that looks to be at least three times his size. His dad watches him carry it to the corner of the block, where he helps him shoot off a few rounds at the Alawite houses across the street.

The other video shows Jamal scampering around after his dad and the other militiamen, all carrying weapons. Jamal is wearing a Palestinian kiffeyeh. The sound of gunfire echoes from close by.

Jamal returns the cell phone to his father. Asked if he likes school, he nods emphatically. His dad beams when asked if his son gets good grades.

“He’s second in his class,” he says with some pride. “Just like his dad. I liked going to class, too.”