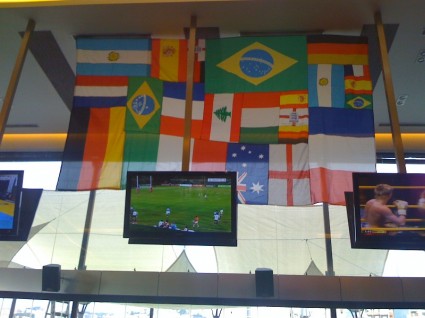 Republic is a very nice restaurant that opened up a year ago. It is huge and has a really nice decor and is very spacy. It serves all types of food and has Shisha (Who doesn’t in Lebanon).

For all the times i’ve been there, service was very good and waiters were very friendly, but food was average.
My friend, who is a dietitian, went with few friends yesterday and was complaining to me about how a certain waiter there was very rude to her and didn’t get anything right or on time. Not sure if it’s the world cup fever getting to everyone or the waiter was having a bad day.

R: Can i have a steak salad please? make sure the meat is not raw (meat comes on a “seekh”). I’d also like a lemon-mustard sauce and another balsamic sauce.

20 minutes later, the waiter gets the salad without sauces and the meat was raw.

R: Can you please get me my sauces? And the meat is raw! Look.

R (being nice): No it’s two pieces, but never mind i’ll throw them away.

8 minutes later, he gets a tartar sauce.

R: This is not what i ordered.

Few minutes later, he gets a lemon sauce (without mustard) and a balsamic sauce. My friend just let go.

Last but not least, She orders the bill 25 minutes before the game finishes so that there’s no delay.

20 minutes after the game ends, the waiter brings the bill.

R: What took it so long? We ordered it ages ago.

Waiter: The game just finished and everyone ordered it at the same time.

R: I specifically ordered it before the game so that it comes on time.

Waiter(who didn’t apologize one time still): So did everyone else!

I honestly would not have accepted to pay the bill and asked the manager to fire his ass.