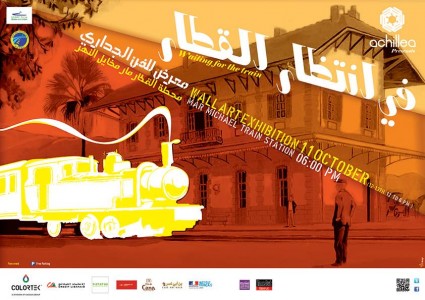 “Waiting For The Train” is a wall art exhibition aimed at reviving the Mar Mikhail train station, which was once a lively railway terminal and has become a deserted residual of a station. It’s quite sad to see the station still abandoned after 37 years with no plans to revamp it or make it fully operational once again. Public transportation is desperately needed in Lebanon.

For those of you interested in visiting the exhibition, check [Here]. I will be passing by today or tomorrow to take few pictures which I’ll share later on.

Achillea is bringing together a group of painters, graffiti artists, designers and illustrators, in an attempt to render an answer within the walls of a veteran site; Mar Michael train station. What was once a lively railway terminal – a beautiful hub on the corner of the east side of Beirut – is now but a deserted residual of a station, where the train has stopped 37 years ago.