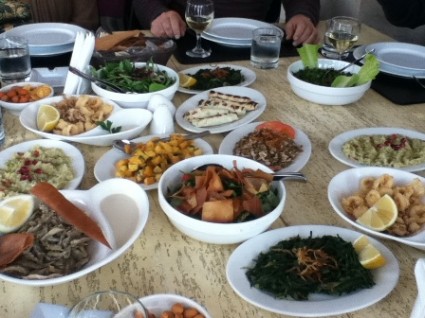 Danielle from ThisisBeirut had her family over during the vacations and her grandfather wrote a small note describing his visit to Lebanon which i found very true. He also stated that Lebanon reminded him a lot of Trinidad and this is honestly the first time i heard that, so it would be interesting to have someone share his/her experience if he/she’s been to Trinidad.

â€œOur Lebanese experience was fascinating. In many respects it was as I had expected and in others completely different. The history of any country is interesting but I feel there is no comparable â€œspaceâ€ that can have had a more tumultuous past or a more varied cultural inheritance. Being physically â€œpresentâ€ in some of the areas where thousands of years of great civilizations have gone before is truly humbling. The relative proximity of the Mediterranean to the snow capped mountains and the Bekaa valley was hard to grasp until the experience proved it so.

My greatest interest was in getting a truer sense of the social and cultural reality of todayâ€™s Lebanon and its people. Not least to place modern Lebanon in its rightful context in the region as a whole. In that search I must confess that the time available was never going to be enough. I got some insights from those I met and enjoyed reading the local news and listening to television coverage that was relevant to the region and not obsessed by US electioneering. My learning from this will lead me to look and listen with a more open mind in the future.

The food we enjoyed was exceptional and the hospitality and welcome were incomparably warm. Still I am left with the most compelling impression being that Lebanon is, above all, contrast. So that there is opulence alongside destitution, antiquity alongside â€œglitzyâ€ modern, sophistication alongside parochialism, tolerance alongside extremism, erudition alongside backwardness, grandeur alongside squalor. Similar contrasts exist in many small societies that are made up of varied ethnic, cultural and religious traditions and backgrounds. I got the feeling that the contrasts are deeper, and their resolution a greater challenge, in Lebanon than in many other places that I know or have visited. Hopefully the vibrancy of the education system and the evident confidence of investors in the economy will contribute to a future that fulfils the present promise.â€