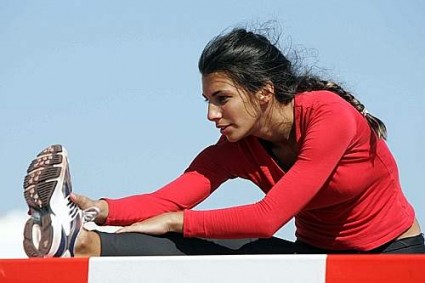 I had posted earlier today that Lebanese athlete Gretta Taslakian was banned from the Olympic Village and had to return home after she was seen wearing Ireland’s uniform during a training session. Added to that and according to Lorient-LeJour’s article, it was Gretta’s coach VahÃ© Abrahamian who testified against her and showed the Olympic committee pictures of Gretta wearing Ireland’s uniform (Not Available anywhere on the net).

I thought the story is very weird and did some research and asked some friends around and the truth is I was shocked to hear what really happened, or at least what I was told from some presumably reliable sources and read in an article. Here’s a summary of the Press Release Inter-Liban club issued yesterday:

1- Gretta is participating in the Olympic games for the third consecutive time unlike Vahe who’s there for the first time. As a result Gretta has a lot of friends among athletes and coaches.

2- VahÃ© was acting like an overprotective boyfriend the whole trip which obviously annoyed Gretta. He would get upset if she doesn’t have dinner with him and once threatened her to file a report against her before the 200m race. Gretta however never skipped practice and tried to contain the situation.

3- Gretta was friends with the Irish coach for years and with others as well and used to roam around the village all the time. The jacket she was wearing was a Nike one that had nothing to do with the Irish team.

4- The Lebanese Olympic committee should have gone through the report Vahe issued more thoroughly and verified the facts stated. Gretta is a great athlete that does not deserve such treatment. What a shame!

It looks like a sexual harassment case and if this is true, this coach will be in serious trouble when he gets back to Lebanon.