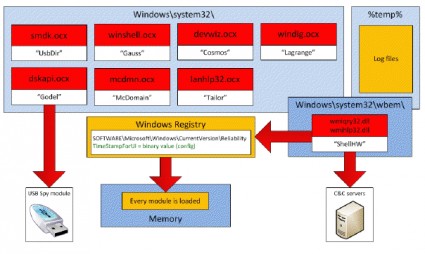 The malware, which steals system information but also has a mysterious payload that could be destructive against critical infrastructure, has been found infecting at least 2,500 machines, most of them in Lebanon, according to Russia-based security firm Kaspersky Lab, which discovered the malware in June and published an extensive analysis of it on Thursday.

The spyware, dubbed Gauss after a name found in one of its main files, also has a module that targets bank accounts in order to capture login credentials. The malware targets accounts at several banks in Lebanon, including the Bank of Beirut, EBLF, BlomBank, ByblosBank, FransaBank and Credit Libanais. It also targets customers of Citibank and PayPal. [Article]

More info on the malware [Here].

See Also:Picture of the accident between a bus and a truck
Posted By Najib
Categories INFORMATION,LEBANON,TECHNOLOGY