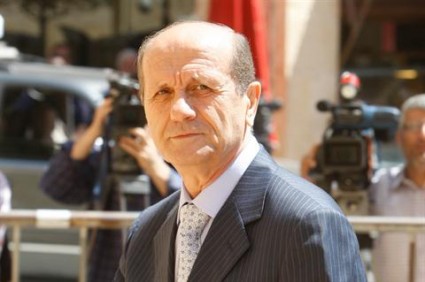 I am as confused by Marwan Charbel’s behavior as Mustapha is, and I must say even though I believe that he’s a good man, he does not look like he’s the right person for this job. I am not saying he’s not qualified, as he is well-known to have trained and led few of the best units in the ISF, but given the circumstances we are living in, he’s failing on every aspect.

For those of you who missed out on this piece of news, it appears that our Lebanese minister of Interior teared up when asked about the security in Lebanon and the rise in crime. I am not saying he’s not allowed to cry, but such questions should not bring tears to a minister!

There are tons of solutions that could and should be adopted to enhance the security in all the Lebanese regions and that wouldn’t cost the ministry a dime. So instead of tearing up, maybe it’s time to stop living denial that all is great and everyone is happy and adopt few practical measures to boost safety and stop crimes.

– Municipalities MUST play a bigger role in their towns and cities and be given the appropriate equipment and weapons to monitor their areas and perform day and night shifts. If the Ministry of Interior does not have the necessary money, I am quite sure a lot of people, especially those wishing to run for the upcoming elections, will donate money left and right.

– Every region/town/city in Lebanon is dominated by one or two political parties. While they might disagree on politics, they do care about families in their areas and would not spare a chance to cut down violence and stop crimes. The ministry here can incite all political factions to report any wrongdoing and let the police/municipality handle it.

– I have barely seen any army or ISF checkpoints or patrols lately. While the minister is arguing that a lot of security personnel are being recruited as bodyguards to few politicians, I am sure there’s still enough people to run patrols and set up checkpoints.

– Last but not least, politicians requesting security personnel should be allowed to recruit from special security companies, even foreign ones, and have one or two ISF officers to coordinate all their moves. I don’t see where’s the harm in doing so.

I have lost count of the times I have suggested those solutions, and I’m sure there are many others, but I will make sure to suggest them again and again until someone hears me. I was shocked to read Mark’s post earlier this morning as I always thought Sheile was a rather peaceful area.

PS: I am tackling this issue as the problems are purely logistical and NOT political and I would like to ask everyone to keep the discussion away from politics. Despite the complexity of the political situation in Lebanon and the divisions we have, there are always ways to go around those issues and seek the better for the Lebanese, such as the ones proposed above.