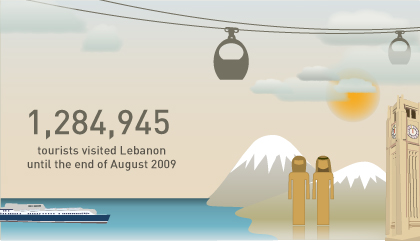 In June 21, Tourism Minister Fadi Abboud said that the number of visitors to Lebanon has increased by 26.6 percent compared to this time last year, the National News Agency (NNA) reported on Wednesday. [Source]

Since then, we haven’t heard any updates on the number of tourists in Lebanon and to be honest, i think the numbers are going down and drastically. I’ve been going around and i barely see tourists or cars with Arab plates that used to fill the streets. There’s still traffic and all, but much much less than last summer.
Yesterday i was in Gemmayze around 11:30 pm and the street was barely crowded and few bars were filled. Either everyone is going to Skybar or something’s not working this year.

Having said all that, i find it hard to believe we are gonna set another record tourism season in 2010.