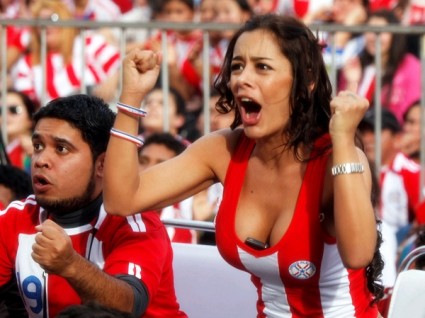 It looks like the most beautiful teams, not just the strongest teams are winning in the 2010 World Cup.

According to beautifulpeople.com, the Spanish team has the highest average beauty score (5.79), followed by the Dutch (5.52) and the Germans (5.15). [Full List]

The best-looking player turned out to be Fabio Cannavaro, while the ugliest player was England player Wayne Rooney. [Eurosport]

Finally, Paraguay might not have the most beautiful squad, but one of its supporters, Lingerie model Larissa Riquelme, has promised to run naked through the streets of Asuncion naked despite her team’s loss.

Maradona also promised to run naked in the streets of Bueno Aires if Argentina were to win the world cup, but who would want such an ugly sight?

For all those interested, No date has been set yet for Riquelme’s naked run.