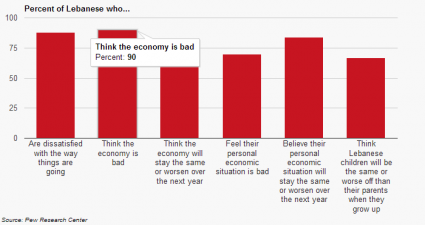 I don’t think we needed a poll to realize that but this is yet another proof, a scientific one this time, that Lebanon is not doing well and that businesses will suffer this summer unfortunately. More importantly, it’s a wake up call for all Lebanese to cast their votes wisely in the upcoming elections and elect those who chose to help the country not screw it over and over again.

Nine out of every ten Lebanese believe the country’s economic situation is bad, according to a new survey from the Pew Research Center published Thursday. Of those nine, nearly two thirds describe the economic situation as “very bad”. A mere one percent of Lebanese say the economy is “very good”.

The outlook for the future is equally dim. 48 percent of those polled expect the economy to get worse over the next year, while 47 percent predict today’s generation of children will be worse off than their parents. No wonder 88 percent say they’re dissatisfied with the country’s direction — more than in any other Arab nation surveyed. [Executive-Magazine]

If you want to check the original research paper, click [Here].

See Also:The Minimum Wage In Lebanon Compared To Others From Around The World
Posted By Najib
Categories ECONOMICS,INFORMATION,LEBANON