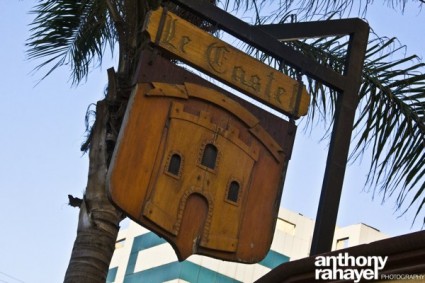 I lived in Keserwan most of my life and most of my outings with friends as an adolescent were around Kaslik but I’d never go to Le Castel as it was a place for families or older people usually. Added to that, my parents would always take us outside Keserwan, usually Beirut or up to the mountains, on Sundays to have lunch. Nevertheless, I did end up going to Le Castel a few times in later years and I remember liking the food and the exquisite desserts.

This being said, and knowing that Le Castel closed down a few days ago, Mustapha from the BeirutSpring wrote a nice tribute about the place which I thought is worth sharing, specially that he used to be a loyal customer.

When I was a young child growing up in Tripoli, I used to believe that Beirut and Kaslik were the same place.

Ray7een 3a Beirut lyoum, “We’re going to Beirut today” was what our parents told us when they wanted to take us to Kaslik. In the early 90s the war was over but not quite so over. Things were safe enough to drive from Tripoli to Kaslik, but not safe enough to go all the way to Beirut, and Kaslik had everything.

Kaslik was the best place in the world. It had it all, the glitz, the shopping, the arcade games in Espace 2000, the movie theaters. It was unlike anything I saw in Tripoli back in those days; places with french names and women who dressed like in the movies. My adolescent self especially appreciated the ladies who sauntered around in short skirts and beachwear, a sight I had never seen in Tripoli. I was in heaven.

Le Castel is where my father and I would sit while my mother and sister did their all-day shopping marathons. I hated shopping, and so did dad. Le Castel was our refuge, our Kaslik home away from home. He would drink coffee, smoke his cigarettes and read Annahar. I would eat Chou à la Crème, watch the beach, the cars moving by, and stare at those strange and beautiful people. I had the best time, and this became a tradition.

Even when I grew up and started driving my own car, I didn’t stop going to Le Castel. In my drive from Tripoli to Beirut for university at the end of each weekend, Kaslik was conveniently located in the middle and Le Castel was where I had my break. I thought I was being more modern than my father because I read the International Herald Tribune instead of Annahar (the IHT came bundled with The Daily Star in those days), I also didn’t smoke and I drank cappuccino instead of espresso. Take that dad, I’m my own man now.

The end of an era

All those memories came rushing through my head when I read today that Le Castel has shut down. I was sad and melancholic, but I understood. In many ways, Le Castel resembles a Lebanon that no longer exists, a Lebanon where people lazily hung around, smoked, read real newspapers and payed outrageous amounts of money for coffee and pretentious patisserie.

But I’m not here to explain or to blame; I didn’t find any injustice in Le Castel’s sunsetting. All I wanted to say is that I had some very good time here, time that I hopefully will never forget. But life moves on, and I hope the new place will bring great new memories for a new generation. [Link]