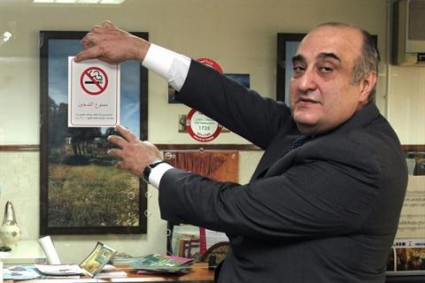 How come he only thought of mentioning that now? And if he did earlier, why didn’t he say anything about it to the government?

The implementation of the smoking-ban law will start on September 3rd.

BEIRUT: Tourism Minister Fadi Abboud warned Tuesday that the ranks of the Tourism Police are severely understaffed, and he may not have enough officers to enforce the new smoking ban that goes into effect next week.

At a news conference at the ministry, Abboud said he currently had a staff of around 70 tourism police officers, but only 10 of them could be devoted to enforcing the smoking ban. That is a far cry from the 256 Tourism Police units the law says the ministry needs to effectively enforce the ban. [Link]