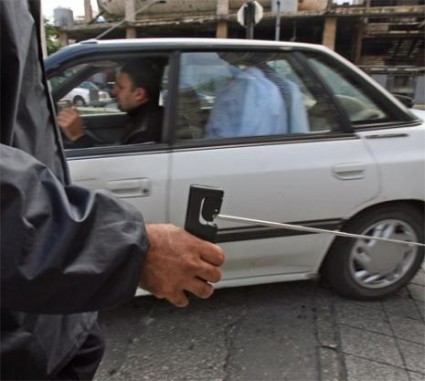 Radwan Mourtada from Al-Akhbar put dynamite sticks and hand grenades in his car and roamed around Beirut, visiting malls and passing by Army and Hezbollah checkpoints in Dahieh. He wanted to test the efficiency of these bomb detectors that we see almost everywhere in Lebanon now but as expected none of them detected the explosives even though they were put in the front and not hidden in the trunk.

To be honest, I don’t think it was necessary to do that experiment as it is well known that these bomb detectors don’t work and the guy behind them was put in jail 3 years ago. Moreover, it could have ended badly for the journalist in question as that’s not the smartest thing to do at the moment.

On a different note, I’ve heard that there are few areas in Lebanon and one mall (City Mall If I am not mistaken) that use sophisticated bomb scanners that are efficient but cost way more than the small useless ones. Radwan did mention he spotted a more advanced bomb detected in Dahieh but it was useless like the others. Unfortunately he didn’t film anything or at least didn’t upload any videos so we can’t really tell what he saw or where he went.

What is sure is that the Ministry of Interior needs to take out all these defective bomb detectors ASAP from the market and penalize those who still are using them. I think most businesses, mainly malls, can afford to spend few extra dollars to buy decent bomb detectors or get trained dogs.