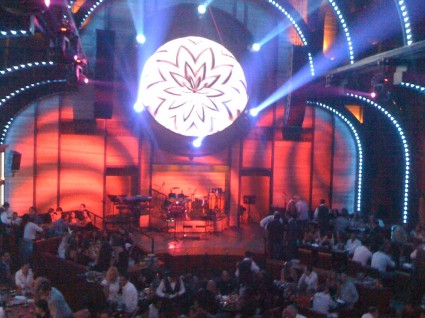 I had a birthday party yesterday at Al Mandaloun and it was one of the best parties I’ve had in years, and most expensive too …

The place is very spacious from the inside as shown above, with a stage where several artists perform throughout the night. We were seated upstairs looking over the whole place.

We arrived there around 11 pm, there were lots of parking around the place which is pretty cool. First thing we did was order dinner, I had a chicken pollard while my girlfriend had the smoked salmon platter both of which were really good. Then the show started with a lady singing Fayrouz songs followed by old Lebanese songs, then a Jazz singer, a few disco songs, an artist performing Mika songs (that was not so great), some rock opera music and more.

There’s barely a few minutes between every artist and the music is great even between the breaks. I recorded some songs and I will upload them later on this weekend.

Price-wise, the minimum charge is between 75$ and 100$, including dinner and drinks.