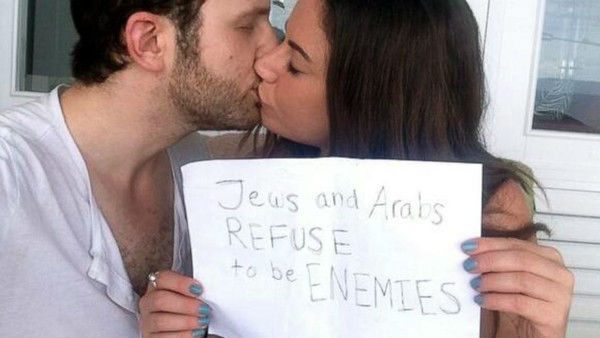 He calls me neshama, I call him habibi. Love doesn’t speak the language of occupation #JewsAndArabsRefuseToBeEnemies via @SulomeAnderson

Sulome Anderson is an Arab-American journalist who writes for the Atlantic, Foreign Policy, NY Mag & VICE. She’s half Lebanese and tweeted the other day a selfie with her Jewish bf kissing with a message that said #JewsandArabsRefuseToBeEnemies. The photo quickly has gone viral and became a symbol of peace. Sulome Anderson is the daughter of former AP Middle East bureau chief Terry Anderson, who was kidnapped in Lebanon three months before she was born in 1985 by a Shiite militia and was held for seven years.

I think these messages are important, because even though they won’t help resolve the conflict, it brings people, mainly Jews and Arabs, together as this conflict isn’t just about politics but about people and human values. It is unacceptable that children and innocent civilians get murdered that way and no one’s able to stop these massacres from happening.

My boyfriend is Jewish, raised in an orthodox family, and I’m half Lebanese. Last week we were on vacation and, at the suggestion of a journalist friend, added a photo of us together in support of what was then a little-known initiative called Jews and Arabs Refuse to be Enemies. I wrote those words on a piece of paper, kissed my boyfriend, snapped a picture, and posted it on the group’s Facebook page. I also tweeted it to my modest following and added this caption: “He calls me neshama, I call him habibi. Love doesn’t speak the language of occupation.”

See Also:#UberRECYCLE Relaunched: Get Rid of Your e-waste & Keep It Away from Landfills
Posted By Najib
Categories INFORMATION,LEBANON,MIDDLE EAST