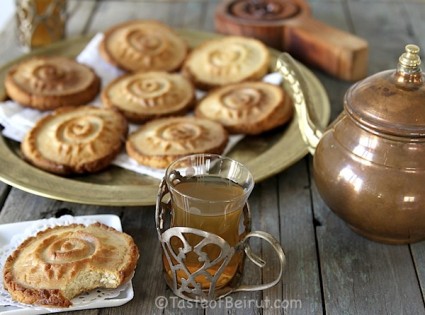 Ashoura Day is commemorated by Shi’a Muslims as a mourning day for the martyrdom of Hussein, the son of Ali and grandson of Prophet Mohammad during the Battle of Karbala some 1300 years ago. Re-enacting the battle has been long a tradition among the Shiite communities and involves in few areas self-flagellation in order to remember the blood that Hussein shed for them.

To be honest, I am not a big fan of the Tatbir, or self-flagellation act and I’d rather see people organize blood donation campaigns on that day (Like Hezbollah does) but some areas in Lebanon such as Nabatieh like to maintain this tradition, which seems to attract foreigners every year.

As far as Ashoura food traditions are concerned, there’s the Hreessé dish and the Abbas cookies and I absolutely love both! I don’t know why I had never heard about Abbas cookies until this year but they’re definitely worth a try. If you are interested in the recipe, Taste Of Beirut wrote about it [Here].