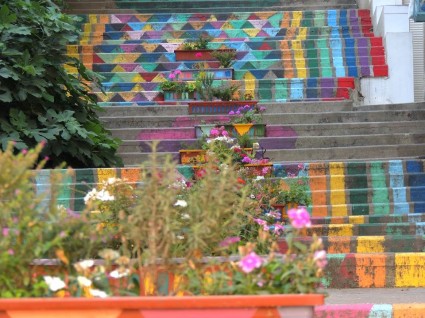 Mar Mikhail stairs, also known as Massaad stairs, have always served as a practical passage for residents between Mar Mikhael and Geitawi. They’ve also become in the past few years a public gathering space, an artistic venue for young Lebanese and non-Lebanese and somehow an attraction for Mar Mikhail visitors specially after the stairs were painted in colorful geometric shapes in 2012.

I love these stairs and I don’t want them to see them get demolished and replaced by a road to a new construction site. You can’t just destroy a landmark like the Massaad stairs and all of us should protest against it and spread the word!

There’s nothing official yet about plans to destroy these stairs but no one has officially denied them as well except Beirut City Council member Hagop Terzian. Knowing how things work in Lebanon, the decision is never made public until it’s too late to protest it so it’s better to raise the issue from now and put the pressure on the concerned parties.

For those interested, there’s a protest taking place today from 4pm till 8pm at the Mar Mikhail stairs.

To pressure the municipality to reverse its decision of the demolition, the neighborhood’s residents called for a sit-it next Thursday, November 14, at 4 pm.
They asked civil society organizations and preservation activists to stand by them in this campaign to defend the Massad stairs.

WE WILL SAY:
NO for Bulldozers
NO for Demolition
NO for Mafiosity
YES for Saving Beirut Heritage
YES for Achrafieh Stairs!

Please invite your friends, families, neighborhoods… we should show them our solidarity! 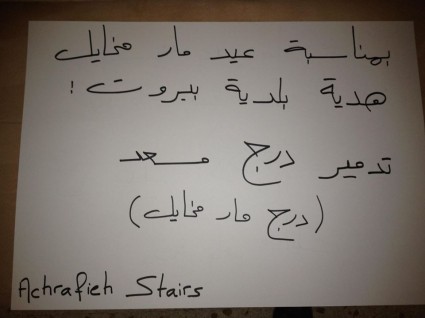