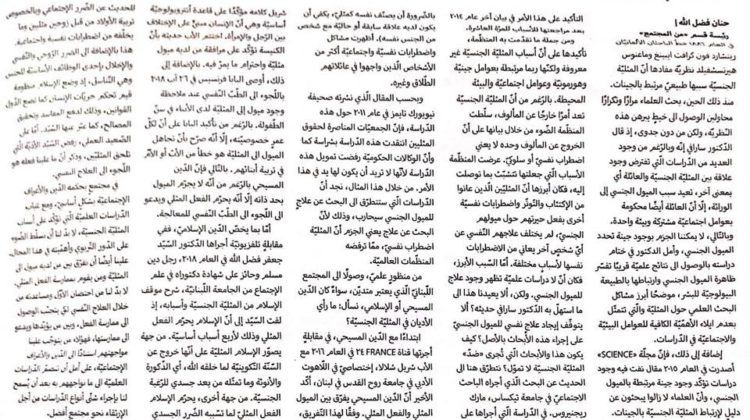 Last week, I saw a couple of homophobic articles published in AUB’s Outlook paper being shared by ex-AUBites including one of Outlook’s ex-Editor in Chief. One of the articles tackles the “elusive search for a gay gene” and encouraging therapy to treat homosexuals.

I waited a bit to see how Outlook will respond, only to find out today that they issued a pathetic statement claiming that they “included 6 articles that dealt with homosexuality”المثلية” topic that was chosen by the editorial team to be discussed”, and that “three articles expressly defended and stood in support of the LGBTQ+ community after last week’s incident, while the others expressed mixed opinions and perspectives”.

I have no idea who’s running the paper these days but it’s disgraceful to see Outlook publish such opinions and not even offer an apology to the LGBTQ+ community. Several AUBites and Outlook ex-staff members have launched a “call to rebuild AUB Outlook and condemn the actions of the current board following homophobic articles” and I join them in their call to reform Outlook.

In times where most countries are embracing differences and legalizing marriages among homosexuals, it’s shameful to see a leading and prestigious institution like the American University of Beirut allow such articles.

It is important to note that Outlook’s bylaws support our stance. Article 5.9 clearly states that “published materials may not promote hate speech towards an individual or group on the basis of attributes such as gender, ethnicity, religion, race, disability, or sexual orientation.” In addition to that, this year’s editorial decisions go against all points of the international journalistic code of ethics: seeking truth, minimizing harm, acting independently, and being accountable.