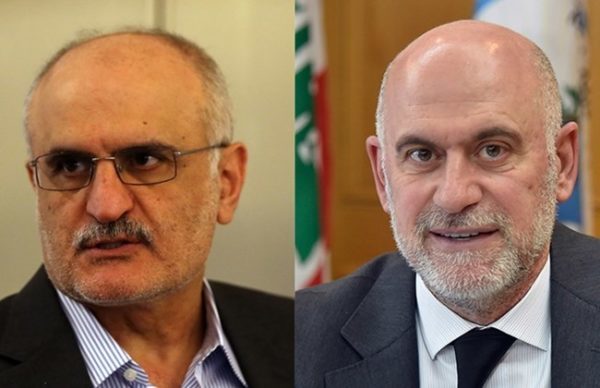 Why did they get sanction them?

Fenianos:
As of mid-2019, Hizballah used its relationship with officials in the Lebanese government, including Finyanus as Minister of Transportation and Public Works, to siphon funds from government budgets to ensure that Hizballah-owned companies won bids for Lebanese government contracts worth millions of dollars. In 2015, Hizballah gave Finyanus hundreds of thousands of dollars in exchange for political favors […] Finyanus also helped Hizballah gain access to sensitive legal documents related to the Special Tribunal for Lebanon and served as a go-between for Hizballah and political allies. In addition to his activities supporting Hizballah, Finyanus engaged in corruption while in his position as Minister of Transportation and Public Works by diverting funds from the ministry to offer perks to bolster his political allies.

Khalil worked to move money in a manner that would avoid U.S. sanctions enforcement from government ministries to Hizballah-associated institutions. Additionally, Khalil used his position as Minister of Finance to attempt to have U.S. financial restrictions on Hizballah eased so that the group would have less difficulty moving money. Khalil also used the power of his office to exempt a Hizballah affiliate from paying most taxes on electronics imported to Lebanon, and a portion of what was paid was collected to support Hizballah. As of late 2019, Khalil as Finance Minister refused to sign checks payable to government suppliers in an effort to solicit kickbacks. He demanded that a percentage of the contracts be paid to him directly.

Are sanctions a big deal?

US Sanctions are serious business, and given the dollar shortage in Lebanon, they can proven to be very efficient against Lebanese politicians by freezing their bank accounts abroad. All these corrupt politicians have contingency plans based on assets abroad, but they can’t do sh*t when hit with sanctions so yes it is a big deal.

Here’s a glimpse of how these sanctions are defined:

All property and interests in property of the individuals named above, and of any entities that are owned, directly or indirectly, 50 percent or more by them, individually, or with other blocked persons, that are in the United States or in the possession or control of U.S. persons, are blocked and must be reported to OFAC. Unless authorized by a general or specific license issued by OFAC or otherwise exempt, OFAC’s regulations generally prohibit all transactions by U.S. persons or within (or transiting) the United States that involve any property or interests in property of designated or otherwise blocked persons. The prohibitions include the making of any contribution or provision of funds, goods, or services by, to, or for the benefit of any blocked person or the receipt of any contribution or provision of funds, goods or services from any such person.

Are there more sanctions coming our way?

Obviously, but these things take time and they’re also political cards the US might want to play at different times. Till then, and given the actions taken by these ministers, they should also be brought to justice to defend themselves against such blatant corruption charges.