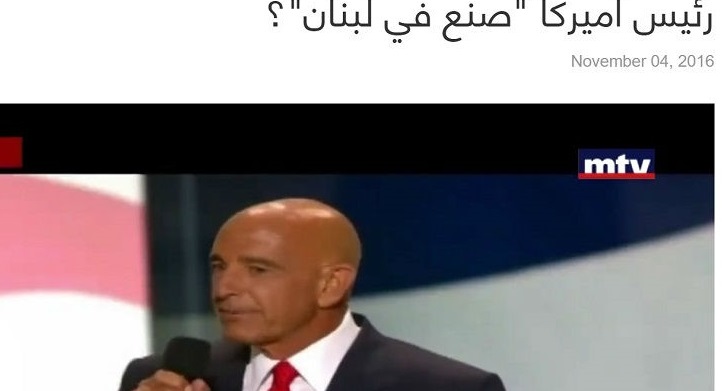 We are two days away from the US elections and Clinton is fortunately still leading Trump in the polls. I am saying fortunately for the Americans of course because both candidates couldn’t care less about Lebanon or even the whole region, and the fact that Trump has a couple of Lebanese advisers doesn’t really mean anything.

Trump’s strategy for the Middle East is to “Take the oil” and he’s probably going to do it the same way he manages his businesses, talks about Mexicans and Muslims, and treats women. No it’s not a good indicator for Lebanon or Lebanese if Donald Trump wins, and no the upcoming US president is not “Made in Lebanon” just because a couple of Lebanese are helping him out.

I’ve been following these elections since the start and it’s truly shocking that Trump has come so far and that it’s still a close race despite everything he’s done. Not even Republicans can deny that he’s a horrible person because it’s on tape. Unfortunately though, lazy people who think that all politicians are bad and don’t do their homework are Trump’s most powerful ally and they are the ones keeping him in the race.

Quoting Bill Maher, “they are not clueless, they just apply our brain power to bull shit. Before people go out for a taco, they will spend an hour on Yelp researching for the most authentic one, all for something that will be out of your body in 15 minutes, but they don’t care who runs the world for four years?”